The end of summer.  It's official at our house.  The sprinkler guys blew out our system this morning  To celebrate the end, the wife and I ate the last of my homemade lasagna.   Our good neighbor, Paul, was generous with his prolific tomatoes.  We ate many fresh salads, but finally used a couple of batches to make a chunky garden sauce.

Easy stuff. Cut an X in the bottom of the tomatoes. Put a pot of water on to boil and fill a bowl with ice water. Plunge the tomatoes in boiling water for 60 to 90 seconds. (It takes a bit longer at high altitudes). Remove the tomatoes with a slotted spoon and place tomatoes in the ice water.

Meanwhile... for spaghetti: chop and cook an onion in a 3 or 4 quart pan. When the onion is soft and translucent, add as much garlic as you like.

The skin should peel right off the tomatoes. Discard skin and cut out the stem top. Add the tomatoes to the pan. Chop or crush them and bring the mixture to a simmer.  Cooking this for a long time would probably result in a traditional sort of sauce.  But, we are after a fresh garden taste.  After about 30 minutes remove from heat and blend.  A stick blender works well in this situation.  Don't try for a smooth sauce - leave it a bit chunky.

It's good to go right now.  I had some homemade meatballs in the freezer and some cooked Italian sausage. I added those to the sauce and let it simmer until everything was hot.  Serve over spaghetti noodles. (I had some of those in the freezer, too.)  The sauce will soak into the pasta making a very satisfying dish.

I used the second batch of sauce to make lasagna.  Start by cooking some onion garlic and hamburger in a 3 or 4 quart pot.

Prepare the tomatoes using the same methods detailed above.  When the hamburger is browned, drain as much fat as you care to and add the prepared tomatoes. Crush the tomatoes with a spoon against the side of the pot.  Let he sauce simmer. This sauce should be a bit thicker than the spaghetti sauce.


Rather than pre-cooking the lasagna noodles, soak them in warm water.  I used the lasagna pan. It leaves the noodles soft and they will not stick together. (This can be done with any kind of dried pasta. It works well for any type of casserole)

Nancy said it was the best lasagna she ever had.

I know the lack of detail in these recipes can be frustrating, but cooking should not be a chemistry lab.  It's about using ingredients on hand along with your intuition and taste to make something good.
Posted by GK at 9:49 AM 3 comments: 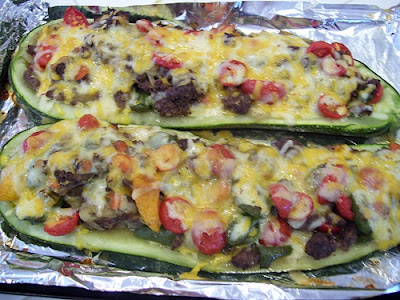 It's the end of the garden season.  I had only one zucchini plant, and I tried to pick them when they were small.  One or two got away from me - hid under the big leaves. Here's one next to an apple for size comparisons.  Cut a couple of slits in the zucchini and cook it in the microwave until it is soft.  Let it cool. 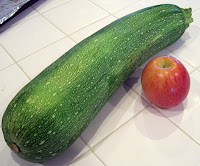 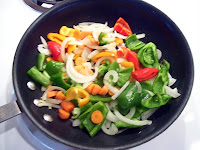 I started with a variety of stuff from the vegetable bin.  Some sliced onion, chopped peppers, and a few carrots. Sautee the vegetables with a lttle olive oil until they are softened. 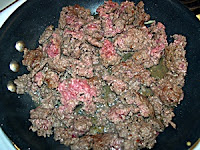 Next I cooked a pound of ground beef. 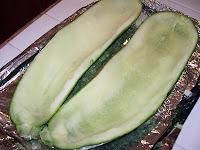 When the zucchini is cool enough to handle, slit it in two. Discard the seeds and pulp.  Scrape out the cooked zucchini and add it to the sauteed vegetables. 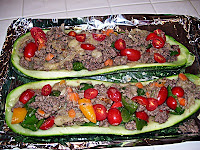 Mix the vegetables and the ground beef.  Fill the two halves of the zucchini with the mixture.  Some small tomatoes on top add color and flavor.  Cook at 350 for about 30 minutes.  Add a topping of cheese and return to the oven for an additional 15 minutes. 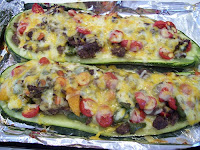 The BLT - bacon lettuce and tomato.  Good anytime, but fresh garden tomatoes in the summer make it special.

Start with good bread.  Lightly toasting the bread gives it a little extra texture to hold together.  It even adds to the taste.

Spread a layer of mayonnaise on at least one side.  ( I like both sides.)

Next add a layer of lettuce.

Tomatoes picked fresh from the garden. 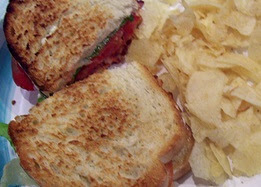 * Quintessential word play.  The Greeks thought the world was composed of four elements - earth, wind, fire, and water. The fifth  essence (quint essence) was a pure example.
Also there are five ingredients, bacon, lettuce, tomato, bread, and mayonnaise.
Posted by GK at 10:43 AM 1 comment:

I've done this before.  See the link for details. Nancy likes this quite a bit  so here it is again.. The shanks are more expensive than our usual fare, but sometimes a little luxury is necessary. 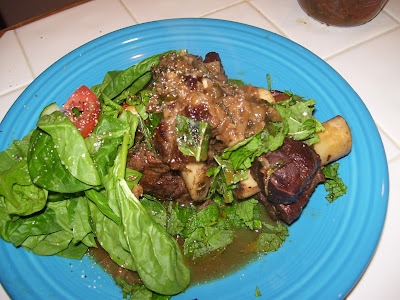 The directions for this variation: Heat oven to 350F

1) Brown shanks in a dutch oven and remove to a plate
2) Chop an onion and cook until soft, add 1 or 2 clove of chopped garlic
3) Deglaze pan with 1/2+ cup wine and 1/2 cup broth (chicken or beef) and 1 TBLS of mustard
4) Return shanks to pan and cover with a cup or so of chopped fresh mint (ours garden is full)
5) Cook about 2 1/2 hours.  Check after 1 1/2 hours and add water if braising liquid is low.
6) Sprinkle some fresh chopped mint over the shanks

Email ThisBlogThis!Share to TwitterShare to FacebookShare to Pinterest
Labels: lamb

If the original paleo population of men were cooking lots of meat, they were not using Weber grills. No iron - no grill - no problem.

This method is also known as caveman steak, dirty steaks (they aren't), or Eisenhower steaks.  The former president was a big fan of using this technique.

Start with white hot charcoal.  Use real wood chunk charcoal, it burns hotter and cleaner than the pressed charcoal briquette. Nobody seems to know what all is in those briquettes. It's a good idea to use a chimney to start the coals so that there is no hint of starter fluid. 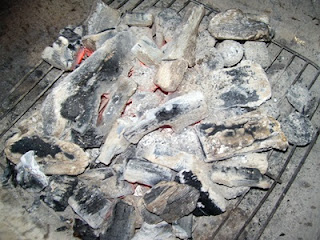 Lay the meat directly in the coals.  I used lamb shoulder chops that had been dry rubbed with salt, sugar, cumin, and oregano two hours before cooking. 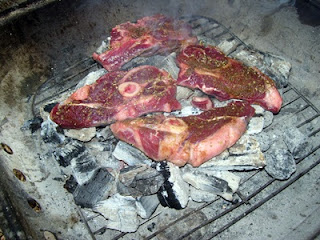 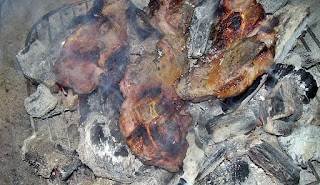 Here is the finished product. A little char on the outside.  Medium rare inside. No grill to clean. 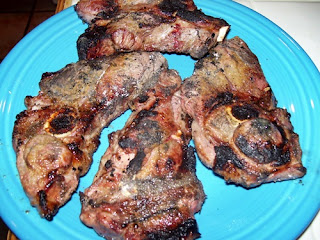 These turned out nice and juicy.  Nancy really liked them.  Since I have a whole bag of the hardwood chunks I'll do this again with a rib steak hiding in the freezer.  I might even try a 7 bone chuck  pot roast if I can find one
Posted by GK at 8:36 AM 1 comment: 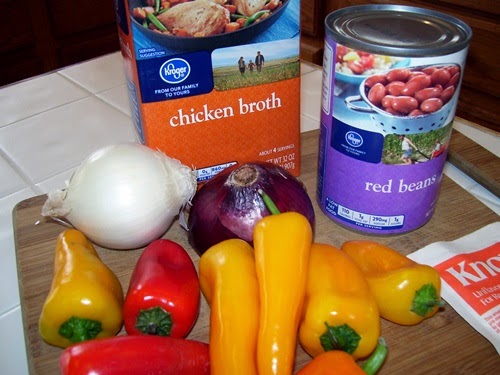 For quite a while I carried around the notion that soups had to be long simmered.  Soup was an all day affair.  But, I was wrong.

This soup uses boxed chicken broth and canned beans. It is not really a set recipe, more of a "fridge soup".  It started as a recipe from a camping magazine.  The main ingredients are peppers, onions and sausage.

Procedure:
*Brown 12 ounces (or more) of sausage.  This time I started with sweet Italian sausage, but I've used smoked sausage, or chorizo sausage.

*Add 1 quart chicken stock.  Homemade stock is always best, but I seldom have it on hand. One of the characteristics of homemade stock is a high gelatin content.  Gelatin from the bones will often cause refrigerated stock to tighten up like jello. A bit of unflavored gelatin adds body to boxed stock.  I added one envelop when I added the stock. It's nice, but not necessary.

*Extras - I had about 6 ounces of cooked mushrooms from the night before.  They went in the pot. Sometimes we have an extra baked potato, it would have been a good addition.  Nancy likes more beans and would have added a second can.  Try something.

*Simmer until heated throughout. 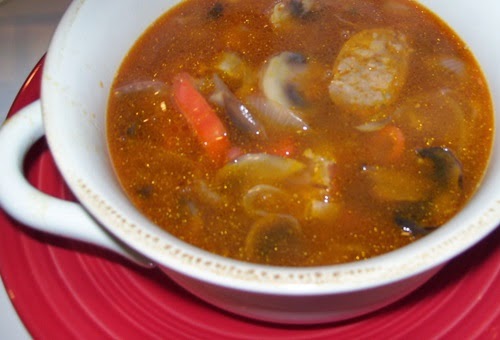 Gravlax is a Nordic dish consisting of raw salmon cured in salt, sugar, and dill. Gravlax is usually served as an appetizer. Lox is a fillet of brined salmon. The American English word lox is derived from the Yiddish word for salmon.

Most techniques involve  two sides of a fish. Each filet is covered with a salt/sugar mix.  Herbs, often dill, are added, and the two side are pressed together and allowed to cure for several days. It is simple to make.

But, if you don't want two pounds of lox, there is another way. This is based on Jacques Pepin's recipe. 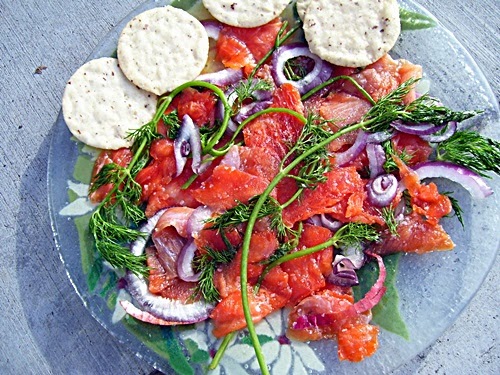 * Start with a good piece of salmon - I used wild-caught sockeye salmon.

* Freshwater fish can harbor parasites and should be frozen (in a deep freezer) before curing. I started with a frozen filet. They are processed as they are caught and frozen in vacuum packs.

* It is not difficult to cut frozen fish with a wave edge knife.I cut a one pound filet into some serving portions..

*The tail end and the ragged front were reserved for gravlax. 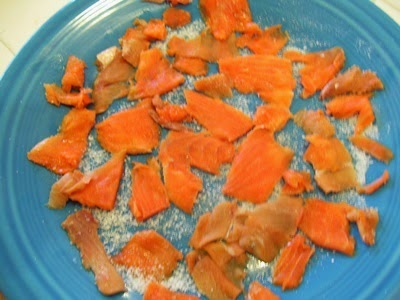 * While still semi-frozen, slice thin pieces of the fish.
* On a clean plate or platter, scatter 1 tablespoon of kosher salt and sugar mix.
* Lay the slices on the salt/sugar without disturbing it. 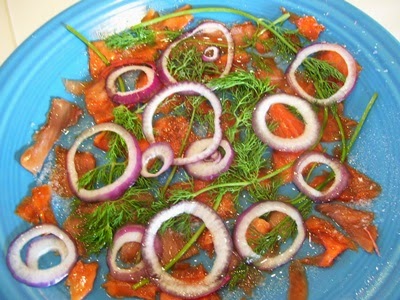 * Sprinkle another tablespoon of the cure mix on top of the slices.

* Add some fresh dill, red onion or a variety of spices. 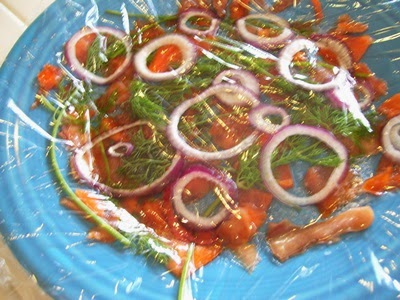 * Cover with plastic, weigh down with another plate, and refrigerate for 2 or 3 hours.

* Blot with a paper towel. Serve with bread or crackers.